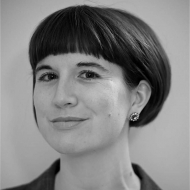 Chloe Teevan is a researcher focused on political and economic developments in North Africa, and European policy options for supporting greater stability in the region.

Recent projects include ongoing analysis of political and economic developments in Algeria following field research in Algiers in March 2019, a series of articles and private memos on EU-Morocco relations, and an analytical report on the politics and economics of marginalisation in Egypt.

Chloe has led on projects for the Ministry of Foreign Affairs of the Netherlands, for the British Embassy in Cairo, and for a variety of private and non-profit clients.

Chloe previously worked with the European Council on Foreign Relations (ECFR) in London and spent two years working in the non-profit sector in Cairo. She has published with ECFR, Middle East Eye, Carnegie’s SADA Blog, Muftah, IEMed, Atlantic Communities, and the Moroccan Institute for Policy Analysis (MIPA), and has spoken on BBC World News, Al Jazeera, France 24 (English & French), TRT World, BBC World Service and other media. She was a speaker at TEDxRoma Mediterranean Carousel in 2015, and has moderated and presented at conferences and panel events in Berlin, Paris, London and elsewhere.

Chloe holds a MA in Arab Studies from Georgetown University, a BA in History and Political Science from Trinity College Dublin, and she participated in the Erasmus exchange programme at Sciences Po Paris.

Chloe has spoken about developments in North Africa on BBC World News (TV) & World Service (radio), on Al Jazeera English, on France 24 (English & French), on TRT World, and to the Guardian, Reuters, Le Croix and others.

She has also briefed officials at the EEAS, FCO, German, Dutch and Belgian foreign ministries, and appeared as a panelist or moderated events in London, the Hague, Brussels and Rabat.