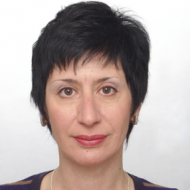 o Free-lance Consultant and Manager for Activities and Projects related to Women’s Human Rights, Gender Equality and Violence against Women and Girls, since 2018
o Vice-president of the European Women’s Lobby, (EWL, www.womenlobby.org ), 2016 - 2018
o Bulgarian National Expert on the EWL Observatory on Violence against Women, 2008-2010 and 2012-2016
o Board Member of the EWL representing the Bulgarian Platform of the EWL (BP-EWL), since 2006
o Co-founder and President of the BP-EWL, since 2003
I have been working in the field of Violence against women and girls for more than 25 years. After my MA degree in Pedagogical Sciences at Sofia University, Bulgaria, in 1993, I started work at the Bulgarian Center of Human Rights as Head of the Information Unit. Ever since, I have been engaged in a variety of activities and in different positions, Researcher, Speaker, Consultant, Trainer and Manager in National and International Programs and Projects, in the area of Women’s Human Rights, Gender Equality and Violence against Women and Girls.
My work as Vice-President of the EWL, the largest European umbrella network of women’s associations, has given me experience for strategizing and creating good communication and coordination between all member organizations of the EWL. I have been representing the EWL vision and position on VAWG in many international events and conferences, including at the UN and the EU level.
As the Bulgarian national expert on the EWL Observatory on Violence against Women, I have been responsible to collect, provide and disseminate statistical data and analyses on the current situation in Bulgaria to identify critical and emerging issues and to advocate actions to be taken with the aim to achieve improvements.
As President of the Bulgarian Platform of the EWL, a group of Bulgarian NGOs, I have been leading and coordinating our efforts to lobby for new legislation for protection against Violence against Women and Domestic Violence, and for passing legislative measures for ensuring Gender Equality at a national and local level.
Since June, 2018, I am available as a free-lance consultant and/or manager of activities and projects related to my areas of experience and expertise.
Over time, I have served on various Advisory Boards, Expert Groups and acted as a consultant at national and international level in:
o Training social workers and other professionals in providing efficient services to the victims of violence
o Running awareness-raising campaigns at national and European level
o Creating cooperation between institutions, academic society and NGOs
o Lobbying for developing legislation for achieving real gender equality and challenging gender stereotypes.

My main areas of expertise are in the fields of:
o Prevention and protection against Violence against Women, including Domestic Violence
o Council of Europe Convention on preventing and combating Violence against Women and Domestic Violence (Istanbul Convention) and its ratification and implementation at national and EU level
o Antidiscrimination Policy and Gender Equality Mechanisms
o Trafficking in Women for Sexual Exploitation
o Women in Decision-making Process
o Women and Media
o The impact of Nationalism/Populism on Women’s Human Rights.

I have published in several books and journals, organized and conducted workshops and seminars, and have been actively involved in various think-tanks, EU wide research projects, and both national and international non-governmental organizations.

During the last 5 years I have been working on the CoE Convention on preventing and combating violence against women and domestic violence (Istanbul Convention) by providing expertise and analyses to Bulgarian and European institutions, organizing lobbying campaigns and organizing trainings for social workers, police officers, lawyers and other stake-holders on the implementation of the Convention. In 2016 – 2017, I was a trainer in a national program to train Bulgarian social workers and educators on preventive programs to intervene and work against domestic violence and gender-based violence. The trainnings were organised by the Ministry of Labour and Social Affairs and Ministry of Justice in the Republic of Bulgaria.
I also offer experience in pedagogical science, critical thinking, communication and negotiating, team building, ability to work in an international and multi-ethnic team, ability to analyze situations and finding solutions to achieve goals.