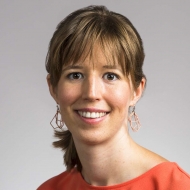 Dr Karen Stroobants is soon joining the Royal Society of Chemistry as policy adviser on research policy. Before joining the RSC she worked on the research culture programme at the Science Policy Centre, Royal Society (of London). Themes covered in this programme include diversity, inclusivity, broad recognition of researchers’ activities, integrity, collaboration, and broadening the definitions of success. She co-organised the Royal Society's landmark conference 'Research culture: changing expectations'.

Karen moved to the UK initially to conduct research on the molecular basis of Alzheimer’s disease in the Dobson group (now Centre for Misfolding Diseases) at the Department of Chemistry, University of Cambridge for which she received a Marie Sklodowska-Curie fellowship from the European Commission and a Raymond & Beverly Sackler By-Fellowship at Churchill College. Prior to this she obtained her PhD in chemistry, for which she received a fellowship from the Research Foundation - Flanders (FWO), at KU Leuven in Belgium.

Karen has moved on to become a full-time policy professional focusing on research policy after being involved from within the higher education institutions she worked for for over seven years. She has acted throughout her career as a mentor to younger colleagues, giving advise on career development, successfully applying for grants and ethical practice and inclusivity in science. She is a strong advocate for female leadership and was invited as a contributor to the 2018 Women and Global Leadership Forum at Trinity College, University of Cambridge after being featured earlier in 2018 as one of the Cambridge women campaigning for gender equality.

Throughout her academic career, Karen has also been actively involved in science to policy exchange activities. She is an advocate for evidence-informed decision making and was president of the Cambridge University Science and Policy Exchange initiative in 2017-2018.