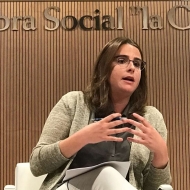 Laura Batalla Adam is the Secretary General of the European Parliament Turkey Forum, a cross-party non-partisan platform composed of sixty members of the European Parliament, which promotes high-level discussions between European and Turkish
officials, political decision-makers, experts and civil society actors. The aim of the forum is to advance a well-informed debate on issues related to EU-Turkey relations while serving as a bridge between Turkey and the EU.

Prior to this position, Batalla worked for several members of the European Parliament providing advice on different policy areas, allowing her to acquire a deep knowledge of EU policies and decision-making processes.

Batalla is a political analyst and commentator, specialising in European affairs and EU-Turkey relations. She has published policy and research papers for renowned think tanks, specialized publications and academic journals, as well as opinion pieces for
Spanish, European and Turkish newspapers. She has a background in political science and journalism and a Master's degree in
European Political and Administrative Studies from the College of Europe.

Laura Batalla is also a member of distinctive young professionals’ networks as the EU-Middle East Forum at the German Council on Foreign Relations (DGAP) and the Turkey Europe Future Forum, a project of the Mercator Program Center for International Affairs
(MPC) in cooperation with TÜSIAD. She is also the recipient of the prestigious Marshall Memorial Fellowship, the flagship leadership development program of the German Marshall Fund.

I have combined my professional practice with academic writing and public speaking. I have published several policy and research papers for renowned think tanks, specialized publications and academic journals, as well as opinion pieces for European newspapers. I also speak at conferences and appear in the media regularly.