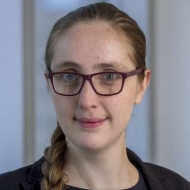 Maaike Verbruggen is a PhD Researcher at the International Security Cluster of the Institute for European Studies at the Vrije Universiteit Brussels. She specializes in emerging military and security technologies and arms production, trade, and control. Her PhD is on military innovation in autonomy, but she also works on drones/unmanned systems, biotechnology and human enhancement.

The cross-cutting issues fascinate her. How do different arms control regimes deal with changes in Science & Technology? How will the Fourth Industrial Revolution affect arms production, diffusion and diversion? How do states try to keep a grip on defence innovation, in a time where transnational civilian companies are at the forefront of innovation? How will emerging military technologies change the environmental impact of warfare? As a result, she is involved with a wide range of military technologies, from surveillance to Small Arms and Light Weapons, and from conventional weapons to Weapons of Mass Destruction.

She has experience working on the societal implications of technology, defence innovation, arms trade, export controls, arms control, disarmament and international law. Previously, she worked at the Stockholm International Peace Research Institute (SIPRI), and she interned at the Department of Arms Control, Non-Proliferation, Disarmament and Export Controls at the Dutch Ministry of Foreign Affairs; and at the Information and Outreach Branch at the United Nations Office of Disarmament Affairs (UNODA).