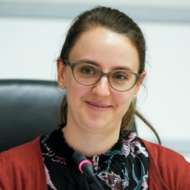 Laurence is a seasoned EU public affairs and communication consultant with over 15 years of experience in Brussels.

She has also political experience, having worked both in the European Parliament as well as in a European political party during the 2009 campaign for the European elections. While she also has media experience having worked as a journalist in a French newspaper, she spent most of her professional years in two of the largest EU public affairs consultancies.

More recently, she set up the EU office of the Spanish public affairs consultancy Vinces, which she keeps collaborating with as a Strategic Adviser.

A woman of many interests, in her spare time, she is a Business Angel, member of Be Angels, the Belgian Business Angel Association, with a special interest in impact investment.

Many times speaker on social media and blogging