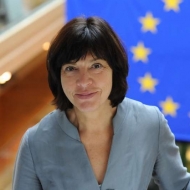 Rebecca Harms is a Member of the European Parliament in the Greens/EFA group since 2004 and the Chair of the Delegation to the Euronest Parliamentary Assembly. From 2009 until 2016 she has been the president of the Greens/EFA group.
Rebecca was born in 1956. Fighting against nuclear power has always been important to her private and political life. A gardener by profession, Rebecca Harms was one of the cofounders of a citizen's group combating the nuclear waste disposal in Gorleben. For several years she was chairperson for this group. In 1984, when her friend and combatant from the German district Wendland, Undine von Blottnitz, was elected member of European Parliament, Rebecca Harms became her parliamentary assistant. Together, they discovered both Europe and the Green Party. Also being a member of the "Wendländische Filmcooperative" (film cooperative of the Wendland), Rebecca Harms contributed to plenty of documentaries. In 1994 she was elected to the regional parliament in Lower Saxony, where she was elected chairperson of the green parliamentary group in 1998. From 1998 till 2015 she was a member of the party council of Bündnis 90/Die Grünen. In 2004, Rebecca was elected member of the European Parliament where she has been the president of the Greens/EFA group from 2009 until 2016.
Apart from Rebecca’s focus on nuclear, energy and environment policies, she is a close friend to Ukraine since her first visit to the exclusion zone of Chernobyl in 1988. By experiencing firstly the independence of Ukraine and then the oligarchization of the country and the power struggles, she got more and more involved into the political debate of and on Ukraine. She closely followed the developments during the Orange Revolution in 2004, the Euromaidan in winter 2013/2014, the annexation of Crimea and the Donbas war and regularly visits Ukraine till now. Rebecca Harms advocates for the EU to invest and engage in the reform process in Ukraine as well as in other Eastern European countries.