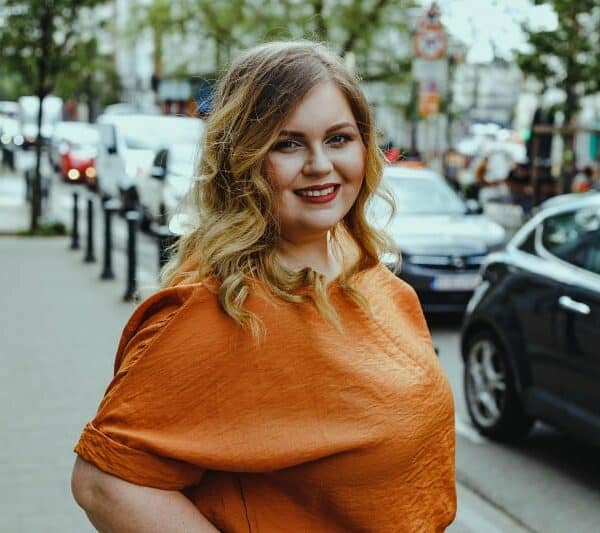 Brussels Binder Beyond: expectation vs reality – why did you join the initiative and what do you take from this experience?

Having been involved in grassroots activism for a few years, I learned that progress on social and human rights issues was only ever going to happen if participation in policy and decision-making became more diverse and representative. This realization soon came after the “Repeal” campaign in Ireland, where we successfully campaigned for abortion rights. I have always believed that women’s bodily autonomy is the foundation in which all other aspects of gender equality rested. Therefore, getting more women into leadership positions became a priority area of focus in the hope it will benefit all women, including their reproductive rights.

Having come from a feminist grassroots perspective to a more institutional gender-focused organisation like The Brussels Binder, it was a little bit of a culture shock, but I realised that both spaces could learn from each other. From working with my BBBeyond colleagues, I learnt a lot about strategic partnerships and EU communications while I aimed to inject that feminist grassroots vibes in our campaigns and our working culture.

What is BBB for you?

Brussels is the epicenter of policy events and analysis, and The Brussels Binder has been a core player in advocating in changing the male, pale, and stale status-quo in these spaces. BBBeyond was an attempt to spread the message on the need for gender diversity beyond Brussels and to build synergies with like-minded organisations across the EU, and for me, this was the core of the project.

Covid and BBB: how did it affect the project and your work?

I was sick with Covid-19 for 2-months during the first wave in 2020. This meant the implementation of project activities had to be stalled. Once I got better, it was then into planning mode to see how we could adopt our activities as like many other EU-funded projects, we planned for many in-person gatherings which had to be changed to a virtual setting. We also took the time to refocus our engagement with think tank partners as they adopted to Covid-19.

Some people are still uncomfortable to identify themselves as feminists and feminism is portrayed as ‘women vs men’: how do we change this?

If you are a believer in human rights, then you are a feminist. Chimamanda Ngozi Adichie explains it succinctly (in her book “We Should All Be Feminists”) that by only using the vague expression of “human rights” is to ignore inequalities impacting certain groups of people. Specific problems need a name so that they can be tackled effectively. Feminism is not about hating men. It is about addressing structural inequalities between men and women for the betterment of all. Therefore, feminism is part of human rights, and it should not be viewed as a dirty word. One way to tackle this stigma is for each of us to declare that we are feminists and to do it proudly. That is why “Feminist” has a prominent position in both my Twitter and LinkedIn bios.

How do we become “better feminists” and advocates for women rights?

There is a quote by Audre Lorde that I think we should all live by: “I am not free while any woman is unfree, even if the shackles of her chains are very different to my own.” There is no such thing as the perfect feminist, but I believe if we do become better when we step outside our own bubbles with genuine curiosity to learn and grow from each other. By seeing the pursuit of gender equality as a collective benefit rather than for personal gain, we begin to see how our struggles interconnect. Like I mentioned before, I stepped into women’s leadership because I campaigned for abortion rights. These two struggles are not mutually exclusive and solutions to advance gender equality should be viewed the same way with a holistic and intersectional approach.

One criticism that we sometimes receive is that the Brussels Binder is not mainstreaming diversity and is not enough intersectional. What is your take on this and what we should do differently?

The criticism is justified because The Brussels Binder for the longest time was staying in its bubble, which is predominantly white middle-class women from EU-policy backgrounds. I think the issue is that as a small volunteer-led organisation, it was so focused on growth that it failed to take a moment to look around and reflect not only internally but what was also happening within the gender equality sphere where the narrative was evolving from “female” to “diverse women”. Thankfully, progress is being made with our DE&I task force where we recently conducted a team audit and wrote an op-ed in EuroActiv about the experience to not only be transparent but to also hold ourselves accountable in a very public way. The team of volunteers will also learn more about intersectionality and DE&I in October with trainings and The Brussels Binder will also be incorporating DE&I within its next strategy process.

One highlight from your BBB experience:

Launching the BBBeyond Toolbox which is an amazing resource. We worked with Graphic Designer, Claire Allard, who designed them so beautifully. For me though, it was the process of co-creating the content itself with 40 women from across Europe over a 12-month period that is the most meaningful.

One regret from the BBB experience:

I do not have any regrets but if hindsight were a gift, we would have changed a few things about the project in the design phase. This includes how we work with think tanks, particularly in our research activities as well as doing more co-creational activities with Brussels Binder and BBBeyond members.

There are so many! I am currently reading “Living a Feminist Life” by Sara Ahmed which is great but one close to my heart is “The War on Women” by Sue Lloyd-Roberts.

One that I recently watched that I enjoyed was Moxie on Netflix. It is the kind of teen representation in media I wish I had when I was 15 years old.

Your next steps in fighting patriarchy:

I have recently joined the Board of Directors of 50:50 NI where I am hoping to make some impact back home in Northern Ireland to improve women’s participation in politics. I have a few personal projects that I am hoping to make happen by the end of 2021 including developing my own consultancy practice where I hope to help organisations be better feminists. A longer-term objective is to develop a cross-community young women’s leadership program for those who reside on the island of Ireland. I will be sticking around The Brussels Binder though where I will be joining the partnership team and continuing to co-lead our DE&I efforts. So, watch this space!