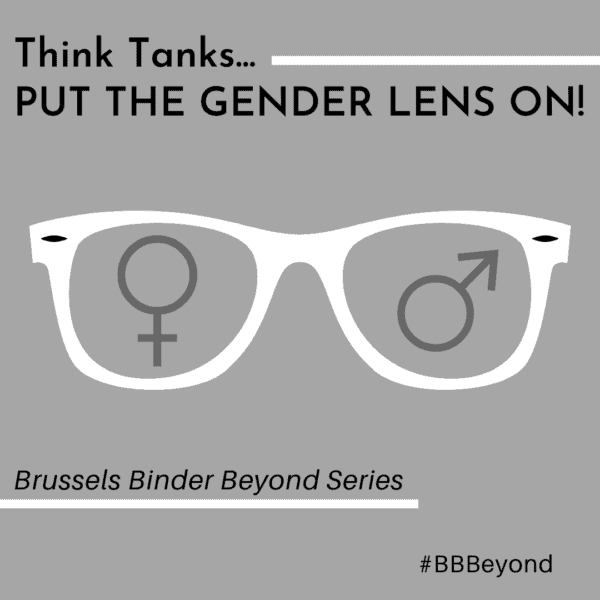 I began my role as Project Coordinator for BBBeyond in March 2019 and at the time, the world of think tanks was a relatively new place for me. However, the impressions that I had of think tanks from an outside feminist perspective seemed to materialise. One is that as a male-dominated sector, the default settings in how think tanks operate in forming their institutional cultures and work objectives, are set by men and for men.

As part of the BBBeyond project, we endeavored to encourage think tanks to take a proactive role to increase gender equality in their events, publications, and media engagements, members of the BBBeyond team surveyed 25 European think tanks.

In the meantime, reading Caroline Criado-Perez’s Invisible Women: Exposing Data Bias in a World Designed for Men highlighted just how important these monitoring exercises were. I was reminded that there is no such thing as gender-neutral outcomes, and to act in a gender-blind way is to disregard gender as an important factor in how products, processes, services, and policies impact citizens.

One of the main purposes of research is to better understand critical issues, existing gaps and to inform policy-making. As research plays an important function in think tanks, it was with dismay to discover from the BBBeyond survey that only 27% of think tank publications are solely authored by women. This is problematic because women and men tend to view and experience the world differently both socially and economically, giving each a unique gendered perspective of reality. This is also known as the gender-lens.

Therefore, research produced by think tanks is heavily skewed to the male lens due to the lack of women in the sector, meaning that their research is currently failing to account for the needs of half the population. This “lens” can also be applied to race, ethnicity, gender identity, (dis)ability, and other intersecting identities; and as most European think tanks are predominantly made up of white and non-disabled people, research produced is also ignoring the needs of diverse populations.

Another finding from the BBBeyond survey was that women were the least represented in publications that were on economic-related topics. Similar findings can also be found in Elsevier’s 2020 report on gender and research. It highlights that the gender ratio among active authors in Economics during 2014–2018 from the EU28 was 50 women per 100 men.

Bruegel, one of the top think tanks in the world specialised in the field of economics, found that gender imbalance in economics could be due to the limited number of women senior fellows. Their 2018 research showed that the average percentage of women Ph.D. students in the top 20 European economic departments is only 35%. According to On Think Tanks, talent pipeline issues are further reinforced by other factors such as competing with both the public and private sector who can offer higher salaries, along with the fact that women tend to avoid sectors/fields where they feel they won’t be supported.

Although it may take some time to overcome wider systemic implications that cause gender gaps in fields of research through affirmative action and mentorships, there are some immediate mitigating measures think tanks can implement at a strategic level. One such measure is gender analytics as a way to ensure a gender lens is applied in every aspect of the research process – from the design phase by establishing criteria for gender-disaggregated data to disseminating findings through gender-inclusive communication.

Working closely with Scarlett Varga, Head of Development at Bruegel, and with her team, I know that they have made it a recommended practice to include the gender lens when writing research project proposals and they would like to advance this practice even when it is not required in the application. Bruegel’s recently launched Future of Work and Inclusive Growth workstream was set up with a critical eye on the gender balance of its research team, as well as to consider gender analytics throughout the research project, with the ambition to include the practice in other research streams.

One of the key trends revealed from the BBBeyond survey was the lack of structural formality of gender and diversity initiatives as part of the think tank’s strategy. From personal observations, the main drivers for these initiatives are often committed individuals who see that change is needed. However, without the support of upper management to commit to embedding gender equality at a strategic level, well-meaning initiatives will fall short of creating organisational/sectoral change.

By making gender equality a strategic objective of the think tank, it would be easier to onboard all research staff to develop a gender competence where they’d have the ability to recognise and utilise a gender lens in their work. Not only would it enhance the quality of research, but it also serves to better outline the true outcomes of economic and social conditions felt and experienced by all citizens.

Progress has been made by think tanks on women’s representation in panel events, mainly thanks to initiatives like The Brussels Binder and EU Panel Watch. However, the gender lens needs to go one step back so that policy analysis and recommendations at this stage are already representative.

There are small rumblings inside the think tank sector though on the issue with a growing awareness of the need to improve gender equality in research. Chatham House recently launched a comprehensive toolkit outlining gender-sensitive approaches for think tank activities, including research and analysis. As a feminist, witnessing the chipping away of patriarchal practices and the everyday small acts of challenging the status quo in such an institutional space feels as revolutionary as taking on the patriarchy on International Women’s Day.

The BBBeyond project will continue its research efforts during 2021 with a focus on gender in online events as well as gender in research. If you would like to learn more about gender and diversity, particularly for events and media, take a look at our new toolkit series. You can also contact me at emma.rainey@brusselsbinder.org for more information about the BBBeyond project.